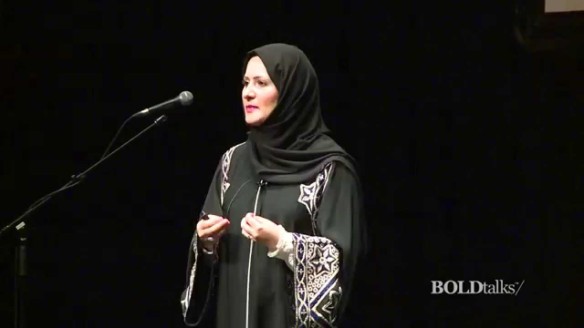 A recent LinkedIn comment on an event happening in a couple of months time has led me to write this post, which I initially featured on LinkedIn and which I’m now posting here so people can find it more easily (LinkedIn, your SEO is lousy). The person asked, rightly, why the event only had two women speakers out of a total of nineteen. She could have also asked why there were no Gulf women on the speaker list. In an effort to help event organizers find these speakers and promote diversity on stage. I’m also tired of manels and mansplaining!

All the women below are exceptional in their own right, and these are all people I’ve worked with or heard speak. If you’re organising a marketing, media, communications or public relations conference in 2018 or beyond, you need to include these women in your event.

For added measure, I’m including a number of women who are based outside of the Gulf. If there’s any additional suggestions, then please do share them and I’ll add to the list. And apologies for leaving anyone out.

Jehan Abdulkarim – A Bahraini national, Jehan has worked in the private sector for over 15 years, at blue chips such as Cisco, Oracle and Accenture. She’s also worked as a journalist. She’s the most senior Gulf woman I know working in non-government, and she regularly talks on issues relating to marketing and comms in emerging markets.

Maha Abouelenein – Egyptian-American Maha has worked for a host of tech firms such as Google and Orascom, as well as agencies such as Weber Shandwick. She’s based between Cairo and Dubai, and often talks about marcomms in the tech sector, as well as issues relating to government and public affairs.

Saba AlBusaidy – Oman’s Saba Al Busaidi is one of the most prominent advocates of digital and social media in the Gulf. She frequently talks about digital marketing in both languages, in Arabic and English. Saba was the first Omani women to to be certified as a Social Media Strategist. She has also played a big role in supporting local talent and small-to-medium enterprises.

Dr Hessa AlJaber – One of the highest profile government figures in the Gulf, Qatar’s Dr Hessa AlJaber has led her country’s ICT strategy for over a decade. Dr Hessa has keynoted many an event, with a particular focus on the impact of technology, and the need to promote STEM education among the region’s youth.

Hind Al-Nahedh – A pioneer in the social media space, not only in Kuwait but in the wider Gulf, Hind Al-Nahedh’s experience spans Corporate Communications, social media, integrated marketing, collaboration and blogging. Hind is often sought out to talk about social media and content/influencer marketing in the Gulf.

Fida Chaaban – Lebanese Canadian Fida straddles both the media and communications worlds. Prior to her current role, she was the editor-in-chief of Entrepreneur Middle East magazine. Today, she serves as the chief communications officer of KBW Investments. With an eye for both, Fida talks about how the two can learn from and improve one another.

Elda Choucair – As the CEO MENA at agency PHD, Lebanese national Elda is probably the most senior woman working on the agency side today in the Gulf region. Elda’s specializes in media planning and strategy. She’s also often asked to talk about how the industry can better promote/support women who want to work in the advertising & creative industries.

Mariam Farag – Marian leads CSR for MBC, the largest broadcaster in the Middle East region. She’s also worked with the United Nations. Mariam often talks about a number of her passions, including corporate social impact, storytelling, humanizing the brand and youth development.

Maria Gedeon – A destination marketing executive with over 14 years of experience, Maria heads up marketing for Majid Al Futtaim Cinemas. She’s also a board member for the Marketing Society and talks about the challenges and opportunities facing the industry.

Noha Hefny – An Egyptian national with 16 years of experience in comms roles with the United Nations, PepsiCo and McKinsey & Company, Noha talks about issues such as mentorship, social entrepreneurship, brand and corporate reputation.

Eleni Kitra – As a global sales lead for Facebook across the Middle East and Pakistan, Eleni is an expert in contemporary digital marketing trends. A Greek national, Eleni has also worked as the MD for OMD Greece. She’s also passionate about mentoring.

Zaira Lakhpatwala – Zaira is the best-known female journalist in the Gulf reporting on the marcomms industry. Zaira heads up Communicate magazine, part of the Mediaquest Group, and she often moderates panels on the marketing and communications industry, on a host of subjects. If you’re looking for an expert/journalist, Zaira is your woman.

Summer Nasief – A Saudi national with a distinguished career in the private sector, Summer has led technology teams for the likes of IBM, Honeywell and Microsoft. Summer talks about innovation and how technology is changing a host of industries, including marketing and communications.

Maysoun Ramadan – Hailing from Jordan and Turkey, Maysoun is the head of Communication and Public Affairs for Roche Diagnostics Middle East. Maysoun’s passion includes talking on the issues of gender parity and female representation. Maysoun is also an EMENA board member for the International Association of Business Communicators.

Fiona Robertson – Fiona is a Senior Associate in the Technology, Media and Telecommunications practice in Dubai’s Al Tamimi & Co. law firm. In plain English, that means she knows the region’s media laws better than anyone else, and is able to knock the eyeballs of any audience out of their sockets with her understanding of legal issues.

Kindah Sais – A Saudi national with Lebanese roots, Kindah is the Global Diversity & Inclusion (D&I) Leader, for the Middle East and Africa at Boeing International. Her career includes roles at Procter & Gamble, and Ogilvy. Kindah talks about the importance of creating diverse and inclusive work places and teams for firms based in the region.

Heba Sayed – As an IBMer who works across both marketing and technology, Egyptian national Heba is often asked to talk about how technology can be better leveraged by both marketeers and communicators in the areas of customer engagement, augmented intelligence (IBM’s definition for artificial intelligence) and digital solutions. 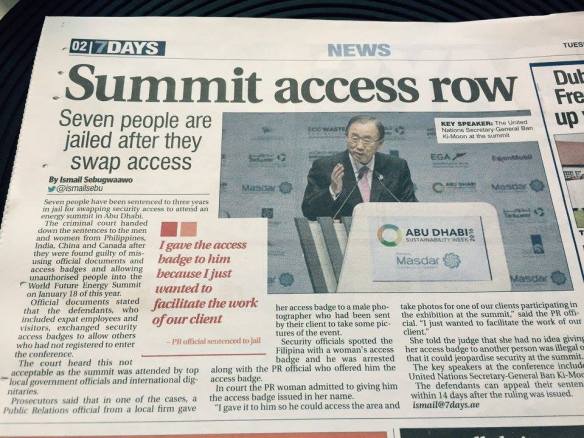 Seven people working in or for PR agencies were jailed for three years for switching security cards during WFES.

Having been in the region for a fair period of time (my family’s history in the Gulf goes back over half a century), I’ve seen and experienced many a situation. These recollections have helped me to grow, metaphorically speaking, a fairly thick skin. But every now and then, a story emerges that still has the power to shock.

A friend shared the below story with me which is from the local rag 7Days. As a PR professional and a former journalist, I know that the below is common practice. But I’ve never heard of such a punishment.

Seven people have been sentenced to three years in jail for swapping security access to attend an energy summit in Abu Dhabi.

The criminal court handed down the sentences to the men and women from Philippines, India, China and Canada after they were found guilty of misusing official documents and access badges and allowing unauthorised people into the World Future Energy Summit on January 18 of this year.

Official documents stated that the defendants, who included expat employees and visitors, exchanged security access badges to allow others who had not registered to enter the conference.

The court heard this not acceptable as the summit was attended by top local government officials and international dignitaries.

Prosecutors said that in one of the cases, a Public Relations official from a local firm gave her access badge to a male photographer who had been sent by their client to take some pictures of the event.

“I gave it to him so he could access the area and take photos for one of our clients participating in the exhibition at the summit,” said the PR official.

“I just wanted to facilitate the work of our client.”

She told the judge that she had no idea giving her access badge to another person was illegal or that it could jeopardise security at the summit.

With the number of events that are held in the UAE and the cost of entry, it’s not uncommon for photographers and even junior PR professionals from the agency side to resort to borrowing someone else’s badge. While it’s not the best or most ethical route to take, when you’re on a deadline and when you don’t have an hour or two to wait to get a new entry badge, it’s understandable that someone may take another’s badge to get access to do their job as quickly as possible. I’ve seen this countless times with big events. And I’ve seen people getting caught, which usually involves a ticking off from security for having (and using) someone else’s badge.

However, being jailed for three years in prison (which will presumably be followed by deportation for those expats who are involved) is something else entirely; I’ve never seen the like before. In future, just be careful when faced with a similar situation. Seven people from our industry being bars is hard to countenance. I’d hate to see anyone I know going to prison for the same reason. 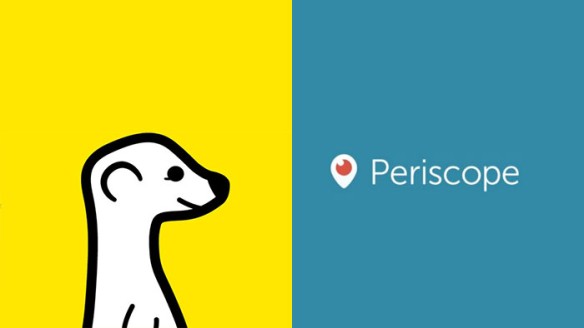 Are you going to make the most of live-streaming services such as Meerkat (left) or Periscope to better communicate your story?

We all love video delivered via the internet, and now there’s several more reasons to love video on the internet. The online community has been raving about the launch of live streaming video apps such as the Twitter-owned Periscope and Meerkat. I’m also excited, but for a different reason. Both Periscope and Meerkat open up a whole world of possibilities for public relations and communication professionals. These live streaming services, both of which were launched this year, will push us further down the line, towards visual communication and away from the old mantra of press releases and traditional media.

Apps such as Periscope and Meerkat enable any and everyone with an iPhone or Android-based smartphone to live stream, at no additional cost and with high-quality streaming. As a communicator, we can now capture and share our stories worldwide or to a select group through Twitter or directly via the apps as the story happens. Live streaming applications are already being used by journalists and commentators in the UAE. Dr James Piecowye of Dubai Eye (@jamesEd_me) and Khaled AlAmeri of The National (@KhaledAlAmeri) are both using Periscope – James to actually stream his radio show live every night as well as events such as Creative Mornings Dubai, Khaled to live stream his views on current affairs. With Periscope, users can comment during the live-stream which in turn fuels the conversation and promotes engagement.

On the PR News website Mark Renfree sums up eloquently why live streaming apps such as Periscope and Meerkat should matter to PR pros.

2) PR pros can provide a whole new type of content. Streaming apps offer communicators a whole new way to engage their audiences—whether they’re consumers, employees or the general public. Everything from shareholder meetings to PR stunts can now be broadcast and, specifically with Periscope, saved and posted on other channels.

3) Live streaming can give communicators increased control over messages. Streaming apps allow communicators to broadcast content themselves, a task that was usually left to journalists and the news media. Periscope and Meerkat eliminate the middle man between communicators and their audiences.

4) This opens up a new chapter for the hot-mic problem. Nearly everyone, everywhere is now carrying a live streaming video camera. For individuals and brands in the spotlight, these apps are adding to an environment in which there is already little reprieve from the ever-watchful eye of the public.