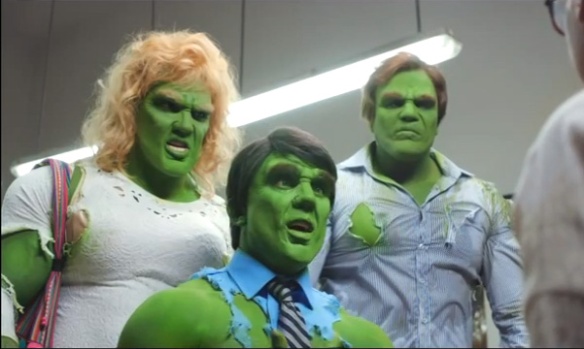 To me, Egyptian advertising is like Marmite. I either love it or hate it. To most of us raised in the region who used to watch lots of Arabic TV, we’ll often know where a commercial is conceptualized and produced. The accents obviously play a part, but it’s more about the humor being used and how the actors communicate with each other.

Recently, I came across one advert which had me in stitches. For anyone who has ever lived in Cairo and who has experienced the trials and tribulations of getting anything done in the city which is nicknamed the mother of the world will understand the point behind these adverts. Mind you, I doubt that they got licensing from Marvel to use the Hulk character in the ads.

There’s not just one advert by this company (what they do and the implied benefits are obvious at the end of the adverts), but a series of different copies which all run on the same theme which were developed for last Ramadan. They’ve recently been airing on MBC. Watch, enjoy and let me know if it passes your Marmite test.

All credit to #BBCTrending for an amazing piece on politics in Jordan, following a bizarre debate in the country’s Parliament which turned from a discussion on the Muslim Brotherhood to one of sexism in politics. Please read the full story here from the BBC’s website. In the meantime, I’m going to quote from the BBC piece below. Even if you’re not an Arabic speaker, the body language of those in the video can be understood by anyone.

The Jordanian parliament is no stranger to screaming matches but a recent incident was so controversial that it provoked people to poke fun at their MPs online.

Earlier this week, during a heated argument over the Muslim Brotherhood, independent MP Yehia al-Saud was cut off by one of his female colleagues, Hind al-Fayez.

When al-Fayez ignored him, al-Saud turned his gaze and hands upwards and shouted “May God have his revenge on whoever brought quota to this parliament!” – a reference to female parliamentary quotas.

Local media reported that al-Saud later made another comment that women were created to put on make-up and cook for their husbands.

Videos of the incident have had over a million views on Facebook and YouTube, and were quickly followed by sarcastic comments and memes.

If there’s anything we have in abundance in the region, its a sense of humor. With scenes like this and outdated views on the place of women, we need a sense of humor more than ever.

My wife has found a new hobby, and I must admit I’m happy about what she’s now up to. It doesn’t involve Louboutins, branded Abayas, or any other habit associated with the size of financial deductions that would even make Premier League footballers nauseous. She’s finally discovered Khambalah, a show produced by Telfaz 11, the makers of La Yekthar. The producers of Khambalah, a word which doesn’t have much of a meaning (my wife translates it as bumming around), use comedy to discuss local issues – some of which are sensitive. Despite the seriousness of the subjects, the shows always hit the mark, even to watchers who may not know Saudi too well.

The trailer debuted about two years ago and the team have produced about 20 shows to date, covering issues such as employment, stereotypes, cultural misunderstandings and the rise of Twitter. The shows have been viewed over 50 million times to date, and the team at Telfaz 11 have again proved their ability to come up with another hit after the success of La Yekhtar.

If you’re a non-Arabic speaker you may find them hard to follow (I’d love it if Telfaz 11 could produce subtitled videos). But the video below, about how Saudis view and think of each other and their reputations is hilarious! Enjoy, and get watching on YouTube!

The Gulf is known for many things but a sense of humour hasn’t traditionally been on the list, even less so self-deprecating humour. With the advent of social media, in particular YouTube, both the Gulf’s residents and nationals have started to develop content like there’s no tomorrow. The best is currently coming from Saudi Arabia. One example is La Yekthar, one of the most popular comedy shows on the net. The team regularly tackles and takes on stereotypes of Saudis, and one of their latest clips was a fantastic set-up of how Saudis are often perceived by foreigners. The video, which is below, also sends a not-so-subtle message to Saudis that this type of image, of arrogance and violence, isn’t the right thing to do.

Bahrain has also followed suit with a number of send-ups of the typical Bahraini stereotypes. The clips, which are common on the video-sharing site Keek, focus on a variety of stereotypes which are mainly based on geography (for example, Al-Riffa and Muharraq). I’m going to have to search for these but I’m going to upload as soon as I can.

Even Qatar is getting in on the act. The only local Qatari comedian I know, Hamad Al-Amari, routinely does stand-up routines poking fun at Qatari stereotypes before switching effortlessly into an Irish accent (he spent part of his childhood in Ireland). Have a look at one of his sets below.

And then there’s the UAE. While there are a number of local comedians here including the likes of Ali Al Sayed the country has arrested those, even nationals, who have poked fun at the country’s stereotypes. Emirati Salim Dahman and a group of young males who made a spoof YouTube video named the ‘The Deadly Satwa Gs’ were arrested after uploading the clip. No reason seems to have been given for their arrest, but the assumption would be that they’ve been detained for insulting national sensitivities.

To quote from 7Days, which featured the story yesterday, ‘The Deadly Satwa Gs’ video is a spoof of young people who try to act tough. At the martial arts school, the recruits learn how to throw a shoe and call for back-up on their mobile phones. When they graduate from the school, they are all given Barcelona football jerseys, supposedly matching a style worn by young men in Dubai.

The video, which is still available online, is hardly groundbreaking satire and is fairly tame when compared to the content coming out of the Magic Kingdom. However, comedy isn’t always a laughing matter depending on where you are in the Gulf.

PS If you want to know why I haven’t mentioned Kuwait ask any Gulf Arab about Kuwaitis and humour.