Now, I love my creativity when it comes to marketing and communications. Especially when it involves bridging the online and offline worlds. McDonalds should have come up with a cracker of an idea.

For one night only, the fast food chain was giving out freebies including “Night In” apparel and accessories, including McDonalds-branded loungewear, socks, slippers, games, and more. All consumer had to do was order their food on the 19th of this month between 7:00PM until 3:00AM, online, via the call center or an app. All the surprise items were to be distributed randomly on a first come, first serve basis while supplies last.

Sounds good so far. They’d also gone out and promoted the campaign through influencer marketing, as well as via their own social channels.

So, what’s the problem I hear you say? Let’s go back to what I first spoke about, namely execution. If you don’t fulfill your promise, then consumers will get annoyed. And they’ll vent on social media. And there was ALOT of venting at McDonalds.

It gets worse for McDonalds. You know a stunt has failed when the UK’s biggest tabloid covers the story with the headline “Burgers and Lies”. And, on a side note, the response given to the Sun left me scratching my head; surely they could have promised to deliver items to all those customers who missed out (the response is below), rather than focusing on those who did get free swag.

“Thousands of customers received a surprise in their McDelivery orders last night, however we know how popular the limited edition merchandise has been and are sorry that some customers were disappointed not to receive any. This was the most amount of merchandise we’ve ever distributed in the UK and Ireland so we are delighted to see so many customers sharing their McDelivery socks and more on social media.”

How to Prep for Executions

Getting campaigns right takes a great deal of planning and experience. But there are a couple of basic pointers to bear in mind.

That’s it from me for today. If you have any of your own tips to share on executions, please do send them across!

As you’re on the internet reading this, I’m assuming that you’re aware of the events unfolding in Gaza and Israel. Social media has become part of the campaign on both sides to raise awareness for what is happening.

As of 11pm Gaza time, a campaign has begun on Twitter to talk about what is happening in Gaza and spread the word, using the hashtags #GazaUnderAttack and #PrayForGaza. What’s fascinating is that those behind the campaign have used Whatsapp to spread graphics on the campaign a couple of hours before it began. The tactic should have allowed the organizers to spread the awareness as quickly and as quietly as possible, to group their supporters and get them active on Twitter all at the same time. In essence, you’re creating a wave of support online, without anyone on the other side being forewarned.

I’ll be watching this intently, in the hope that that the two sides call a ceasefire as soon as possible. I for one hope that #GazaUnderAttack can be a force for good, to stop the suffering. 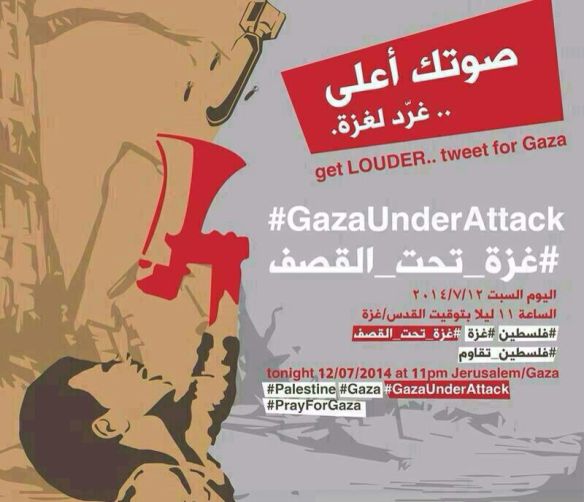