The CEO of Merck, Kenneth Frazier, was the first executive to quit President Trump’s business councils after the events of last week (Photo: Evan Vucci, AP)

For a moment, you could hear the sighs of relief in boardrooms across America. The CEOs of blue chip firms such as General Motors, IBM, Johnson & Johnson and PepsiCo are no longer under the microscope for their response, or lack of, to the happenings in Charlottesville, Virginia last week. These executives were part of President Trump’s business advisory groups. To quote more on the story for those who haven’t been following the news, here’s the report from The Guardian:

Donald Trump was forced to disband two White House business councils that were disintegrating around him on Wednesday in the wake of his controversial remarks about the weekend violence in Charlottesville.

The Strategic and Policy Forum and the White House Manufacturing Jobs Initiative were both dissolved as corporate leaders continued to resign.

Trump claimed in a tweet that this was his decision, writing: “Rather than putting pressure on the businesspeople of the Manufacturing Council & Strategy & Policy Forum, I am ending both. Thank you all!”

Rather than putting pressure on the businesspeople of the Manufacturing Council & Strategy & Policy Forum, I am ending both. Thank you all!

The collapse of the advisory bodies follows seven different corporate leaders stepping down from the two councils in recent days including the CEOs of both Campbell’s Soup and 3M on Wednesday.

Trump had previously stated that resignations from both panels were of no consequence. “For every CEO that drops out of the Manufacturing Council, I have many to take their place. Grandstanders should not have gone on. JOBS!” he said on Twitter on Tuesday.

For every CEO that drops out of the Manufacturing Council, I have many to take their place. Grandstanders should not have gone on. JOBS!

Wednesday’s abrupt decision came after Trump confidante Stephen Schwarzman, chief executive of the Blackstone Group, held a conference call for about a dozen members of the strategic and policy forum who decided to abandon it, the New York Times reported. Executives from the manufacturing council had been due to hold a similar call that afternoon, the paper added.

On Wednesday, corporate leaders who sat on the councils raced to denounce Trump’s comments about Charlottesville and to support the dissolution of the advisory bodies. Jamie Dimon, the CEO of JPMorgan and a member of Strategic and Policy Forum, said in a statement: “I strongly disagree with President Trump’s reaction to the events that took place in Charlottesville over the past several days.” He added that he agreed with the council’s decision to disband.

Jeffrey Immelt, the CEO of General Electric, who had previously said on Monday that he would not step down from the manufacturing advisory board, put out a statement on Wednesday afternoon announcing that he had resigned.

Three members of the manufacturing council resigned on Monday after Trump’s initial refusal to condemn the neo-Nazi and white supremacist protesters in Charlottesville by name. Two more followed on Tuesday after Trump defended some of the protestors in a press conference at Trump Tower. The president targeted one of the CEOs, Kenneth Frazier of Merck, in two tweetsincluding one where he mentioned Frazier, the lone African American CEO to step down, by name.

Now that Ken Frazier of Merck Pharma has resigned from President's Manufacturing Council,he will have more time to LOWER RIPOFF DRUG PRICES!

What is most striking about the events of last week was the slow reaction of these executives, particularly from firms who champion diversity and inclusion. Merck’s CEO, who was the first to act, felt compelled to leave the council due to a matter of personal conscience.

This was a minority opinion, and may CEOs were determined to remain, despite the President’s refusal to condemn extremist hate groups. To quote from the Washington Post, some, such as the four government contractors on the president’s advisory councils — Lockheed Martin, Boeing, Harris Corp. and United Technologies — waited until after the councils had disbanded to publicly weigh in, if they did at all. Even then, several stopped short of singling out the president for blaming “both sides” for the violence at a white supremacist rally this past weekend in Charlottesville.

One example was Lockheed Martin, which offered no public statement. The firm’s chief executive Marillyn A. Hewson sent a note to employees on Wednesday, hours before the councils were folded, explaining that she would remain a member because the group’s mission “remains critical to our business,” even as she insisted that “white supremists, neo-Nazis, and other hate groups have no place in our society.”

Other, such as PepsiCo’s Indra Nooyi, personally condemned the violence, but failed to act beyond that.

Heartbroken by the violence in #Charlottesville. Hate and intolerance are a betrayal of what we stand for as Americans.

Michael Dell, chairman and CEO of Dell Technologies was unmoved, with his spokespeople telling the media that: “While we wouldn’t comment on any member’s personal decision, there’s no change in Dell engaging with the Trump administration and governments around the world to share our perspective on policy issues that affect our company, customers and employees.”

So, what was behind the inability to move? Did these executives believe that it was worth remaining to engage with a President whose position on the Charlottesville events has been condemned?

The best comment I read was shared by a communications colleague online (thank you Tim for this share). Corporate language consultant Michael Maslansky stated, “The era of the fence-sitter corporation is over. If you’re silent about an issue, then each side will assume you’re on the wrong side. You end up really having to choose.”

Corporate leaders have to choose; they can no longer sit on the fence. And they have to be prepared for the backlash, particularly from a President who takes anything and everything personally. Corporate leaders also need to act individually, as the CEO of Merck did – it’s telling that the CEOs who stuck it out decided to end the council via a conference call, preferring collective responsibility over personal ownership (which seems to be a habit of corporate life these days).

I hope those leaders who didn’t criticize what happened last week finally do so. Apple’s Tim Cook has been vocal about his position. It’s time to get off the fence people, and not only say what you believe in and advocate for as a company, but turn those words into actions. 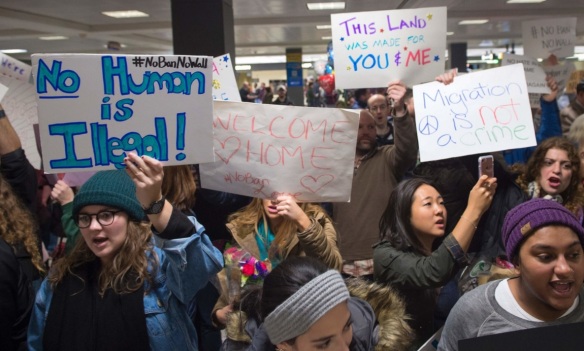 Another day, another controversy in Washington D.C. This time, it’s about the Presidential executive order halting all refugee admissions and barring temporarily people from seven Muslim-majority countries. I’ve written about how corporations will either follow one of two strategies when dealing with the President – they’ll support his America first agenda (mainly by recycling old news), or they’ll stick to their values and come out against policy shifts such as this one.

Over the weekend, we’ve seen evidence of the latter. A swathe of tech firms, primarily from California’s Silicon Valley, have come out against this policy, which has been described as a ban on Muslims, which they view as both un-American and harmful to attracting talent. Here’s a snapshot of views as reported by the ‘fake news’ website Buzzfeed and Bloomberg:

“It’s painful to see the personal cost of this executive order on our colleagues,” Google Chief Executive Officer Sundar Pichai  wrote in the memo, a copy of which was obtained by Bloomberg News. “We’ve always made our view on immigration issues known publicly and will continue to do so.”

In my conversations with officials here in Washington this week, I’ve made it clear that Apple believes deeply in the importance of immigration — both to our company and to our nation’s future. Apple would not exist without immigration, let alone thrive and innovate the way we do.

I’ve heard from many of you who are deeply concerned about the executive order issued yesterday restricting immigration from seven Muslim-majority countries. I share your concerns. It is not a policy we support.

“As an immigrant and as a CEO, I’ve both experienced and seen the positive impact that immigration has on our company, for the country, and for the world. We will continue to advocate on this important topic.”

Many people negatively affected by this policy are strong supporters of the US. They've done right,not wrong & don't deserve to be rejected.

Other Silicon Valley CEOs have also stepped in to support those who will be affected by this decision. In a post on Facebook Uber’s CEO Travis Kalanick wrote that the company is working out how it can financially support Uber drivers who aren’t able to travel back to the US due to the visa ban.

Airbnb’s Brian Chesky wrote on his own Facebook page that his firm would be supporting those impacted by this ruling with free housing.

The list of tech CEOs who are standing up goes on and on, and I don’t want to repeat too much here from what is an excellent article on Buzzfeed. The US tech sector, an industry that owes much to the talent of immigrants and which leads the world when it comes to innovation and product usage, has essentially spoken with one voice against the Presidential executive order halting all refugee admissions and barring temporarily people from seven Muslim-majority countries.

In contrast, older industries such as the automotive and manufacturing sectors (what could be dubbed the ‘older’ corporate sector) have not shared their views. In what is becoming a battle for hearts and minds across America, this public show of values-based beliefs will not be the last by an industry wary of what the Trump administration means for its future. I’ll leave you with another quote, this time from a wonderful article in The Atlantic on how this will be the first of many disputes between the Trump administration and Silicon Valley.

The barriers between Trump and the technology world span both values—the industry emphatically leans left on social issues—and interests. Trump’s hostility to immigration, opposition to free trade, and resistance to replacing fossil fuels with renewable sources to combat climate change all clash directly with the constellation of technology industries that rely on importing talent from around the world, sell their products across the globe, and have invested heavily in developing clean-energy alternatives to oil, gas, and coal. Tech leaders are also bracing for Trump to attempt to unravel the net-neutrality rules that Obama’s Federal Communications Commission adopted, and to push against the privacy standards many industry leaders have sought to maintain.

Whilst we won’t know who is winning over the majority of America’s public, it’s good to see organizations in the tech sector standing up for values which they believe in. I hope other organizations and corporations will remain true to the values that they talk about as well.