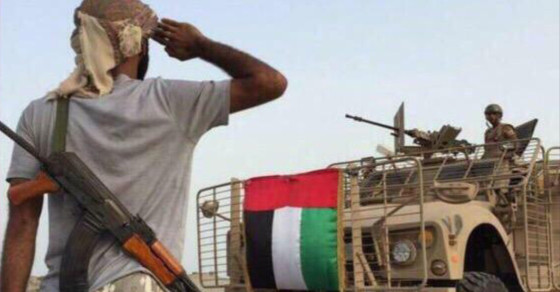 The conflict in Yemen and the UAE’s involvement has helped to bring the community together, according to Emirati editors (image source: vocativ.com)

I wanted to share a fascinating view into Arabic-language media opinions here in the UAE. This week saw the Emirati Media Forum here in Dubai. One of the topics up for discussion was the coverage of the conflict in Yemen. The conflict, which the UAE has been an active participant in since March of this year, has claimed the lives of approximately 70 Emirati combatants. The text below is from Gulf News and is a unique glimpse into how the conflict and those Emiratis who have died have helped to shape the Arabic-language media sector in the UAE and its coverage of the conflict.

The ability of Emiratis to transform tragedy into a sense of unity and national pride was the focal point of discussion at the second session at the Emirati Media Forum.

The session’s theme was ‘The UAE media’s responsible stance on the Yemen events’.

Mohammad Yousuf, president of the UAE Journalists Association, said the media was able to transform the sense of shock, tragedy and loss to positivity and pride.

Sami Al Riyami, Editor-in-Chief of Emarat Al Youm, said the Yemen war was a new experience for the UAE and for the people in the media sector.

“The news came as a shock to us too, as we are humans and Emiratis before we are media people. We were shaken by it as we were not used to seeing the bodies of our martyrs wrapped in the UAE flag — it’s an overwhelming sight. But we were able to turn the tragedy into love and pride for our country,” he said.

Explaining through various media channels why the UAE went to war, what the martyrs died for and what war entails helped in [achieving] this transformation, he said.

The media had no shortage of stories of heroism to write about, Al Riyami said, as the stories just presented themselves.

“It was not about scooping [from] other media outlets; we were all working together so we could get the information out to the people.” Al Riyami said.

In one instance, he said, one of their correspondents lost contact and they had no material to publish. Al Riyami said he called one of his contacts in another newspaper, who gave him the news material to fill the gap in coverage.

“It is our national duty, not a competition about who is getting exclusive content,” he said.

Ali Obaid Al Hameli, director of Dubai TV’s News Centre, said that with the loss of the first martyr on July 16 this year, media outlets felt a great sense of responsibility on how best to break this news to the people of the UAE and, more importantly, to the families of the martyrs.

“The UAE leaders’ engagement and stance and their heartfelt visits to the families of the martyrs and the wounded helped change people’s attitudes and made our job easier,” he said.

He said that they were shocked when they visited martyrs’ families, as the families were the ones consoling them and raising their spirits and not the other way round.

“Many of the families wished that they had more children — brothers and sons — to fight for the UAE,” Al Hamli said.

Abdul Hady Al Shaikh, executive director of Abu Dhabi TV, said that the media also shed light on the humanitarian efforts of the UAE in Yemen — and not just on the military intervention.

“We also wanted to show the Yemeni streets and people, not just coverage of our troops there,” he said.

On the topic of social media’s role, Al Riyami said it is every Emirati’s duty to offset rumours that surface on this platform, by giving correct information on the subject.