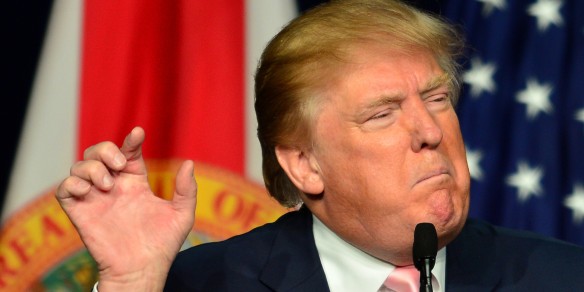 The Trump is known for his outspoken views, but what damage have his latest rants done to brands in the Gulf?

I know you’re tired of hearing about Donald Trump. Everywhere I look on the internet and social media, all I see is Trump, Trump, Trump… I am sorry to write about this man again, and give him yet more coverage that he doesn’t deserve, but this time I’m focusing on brands and what they do when their engagements with celebrities turn toxic.

As everyone with an internet connection knows, Donald Trump said something very stupid about stopping Muslims from entering the US. Here’s the Trump in action below.

The problem for Donald, or should I say the brands that are associated with him, is that he has business interests in the Muslim world, including here in the Gulf. Dubai-headquartered real estate brand Damac has been working with Trump for several years, and has a number of golf courses and other developments named after Trump and his family. Dubai’s Landmark Group sells Trump Home-branded products across the Gulf in its Lifestyle shops. While the Al Tayer Group opened two Trump Home by Dorya galleries in the UAE in June.

The response to Trump’s comments about banning Muslims from the US has drawn different reactions from these three entities. Damac was the first to comment, with the company’s Senior VP for Comms saying effectively the Trump brand is distinct from the man himself.

“We would like to stress that our agreement is with the Trump Organisation as one of the premium golf course operators in the world and as such we would not comment further on Mr. Trump’s personal or political agenda, nor comment on the internal American political debate scene,” said Niall McLoughlin.

Al-Tayer shared its own views with the Dubai media’s 7Days paper, with the following statement: “The statement Mr Trump made on the campaign trail is unfortunate. Given his diverse business interests in the region, we hope that he will reconsider this stand.”

Most interestingly, Landmark Group has decided to drop the Trump range of products from its stores. Landmark works with another celebrity who has a love/hate relationship with the public. Bollywood star Salman Khan was convicted of manslaughter earlier this year back in his home country of India, and yet he is still a brand ambassador for one of Landmark’s retail brands.

“In light of the recent statements made by the presidential candidate in the U.S. media, we have suspended sale of all products from the Trump Home decor range,” Lifestyle CEO Sachin Mundhwa said in an email to media outlets including the UK’s Independent.

Will Damac and Al-Tayer follow Landmark’s example? Or will they stick out the ensuing furor? When does a celebrity engagement do more harm than good? With Trump unlikely to apologize for his comments this can only get messier for those companies which are still associated with the Trump.