Who needs to think about debt when you’re out and about driving a supercar. In their wisdom and in a public relations exercise that is reminiscent of the city pre-2008, Dubai police unveiled the latest addition to their motor pool last week. The US$400,000 Lamborghini Aventador can do speeds of up to 349km/h and will be used to chase down whoever has the balls to think they can speed in Dubai and not get caught. I’m still trying to work out how they’d stop criminals, but I’d assume the very fact that a cop is driving one of these cars would be enough to startle transgressors into taking their foot off the accelerator.

In preparation for the hard work of bringing law-breakers to justice, the Lamborghini and its driving team were dispatched to Dubai Mall to drive around the world’s largest shopping center and pose for pictures. The aim? To show tourists “how classy Dubai is”.

But Dubai Police didn’t just stop there. The news was followed a couple of days later by the announcement that they’d be adding a Ferrari as well. After all, just having a Lamborghini alone is so passe, especially since the UK, Qatar and Italy also did the same several years back. The Ferrari FF is cheaper than the Lamborghini and sells for 900,000 Dirhams or just over US$250,000 dollars. The supercar is slightly zippier than the Lamborghini (I’ve been told) and does 0-100km in a 3.7 seconds. And it has more storage space, including room for two Krispy Kreme dozen donut boxes and paper coffee cups.

To your left, the Ferrari FF. And to your right, the Lamborghini Aventador. It’s Dubai’s version of toys for the cops (credit: Emirates 24/7)

With impeccable timing, Dubai’s Roads and Transport Authority also announced that two new Salik toll gates would be going live on the Dubai-Sharjah border. The gates will collect a toll of 4 Dirhams from each car that passes through them, and the full story plus lots of interesting comments can be read here on ArabianBusiness.com. One adventurous resident posted his take on both stories. I like the idea. 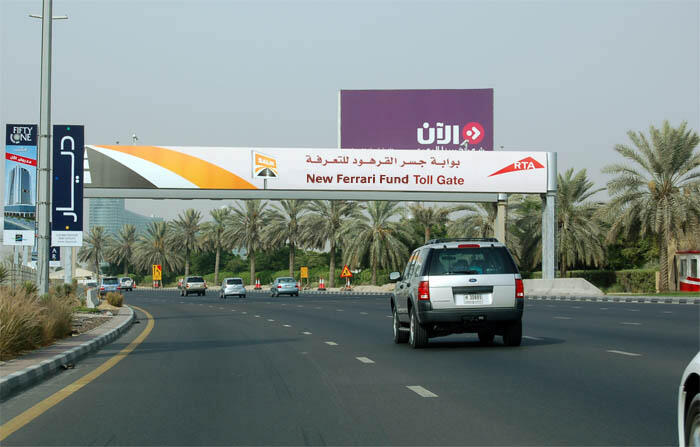 Dubai’s new Ferrari fund, brought to you by the RTA (credit: @danielmarcevans)

On a serious note, most of us could agree that we’re living in an age of austerity. Dubai itself hasn’t been immune from the global economic drop, and the city-state will have to pay US$22 billion of debt next year according to rating agency Moody’s. Most countries worldwide have had to cut back on spending, and if this idea had been ventured in Europe you’d probably find someone losing their job. With so much money to pay off does this send out the right message about debt and responsibility, both on a local and a global level.

While both supercar stories make for great PR, I wonder what thought went into the decision especially with the timing of the two new toll gates. Have the silly days returned to Dubai? For a city that has done so much good and yet still has many challenges to face, I do hope not.

No mention has been made if Dubai Police have insurance for the Lamborghini or the Ferrari.