The question used to be who’d be a teacher. Today it’s more likely be to who’d be a school owner in the UAE? The country’s private education system has been under attack recently for the cost of educating (mainly) expatriate children. There was a wonderful article written by Arabian Business Editor Courtney Trenwith about the issue of high school fees in the UAE, and an apt comparison was made between secondary education in the UAE and tertiary education back in the United Kingdom.

An Arabian Business investigation last month revealed the startling fact that it costs more to send a child to some Dubai schools than a British university.

Meanwhile, a year’s tuition at universities such as Cambridge and Oxford is less than AED53,000. Until recently, UK university fees were even cheaper.

One of the largest private education firms is GEMS, which claims to educate over 110,000 children and be the leading Kindergarten to Grade 12 private education operator in the world. In December of 2012 GEMS announced that it would close Westminster School in Dubai, which caters to 4,800 pupils from ages five to 18-years old.

The issue which has been covered extensively by the online portal and business publication Arabian Business has caused an uproar with parents who are naturally concerned about the disruption to their children’s education. In a letter sent to parents which was published by Arabian Business, GEMS said the Westminster School would shut in June 2014 with students being given priority placement in other GEMS institutions.

“In recent times our ability to invest the resources required to produce the improvements needed, both educationally and in infrastructure, have been severely restricted because of the current fee structure… We simply cannot offer a high quality education at this level that we see as our duty to provide. Indeed, salary increases during the same period have been at a level higher than any fee awards,” wrote GEMS executive director Dino Varkey to parents.

And now we come to the issue of communications. There are few subjects as sensitive as education, especially when it is for your own children. As the largest company in the industry and one which seems to be making the most headlines, GEMS should realize it needs to do more in terms of its messaging. The company is currently looking to hire a PR and communications manager in Dubai through LinkedIn (if you’re interested in Mission Impossible do click through here).

The question I’d pose to GEMS is how can anyone justify charging more for a year in high school than for a year in university? As there’s little to no public schooling system here for expatriates (in theory an expatriate child can go to a government school but fees will still apply) what are parents to do apart from swallow the bitter pill? But will that help GEMS and the other companies in the long-run? Isn’t the issue more than simply looking at how to spin the company line on high educational costs and school closures? Isn’t this more about the fundamentals of the business, which need reassessing?

“The ambition that we work towards is five million students by 2024. If we got to the five million number as a conservative [estimate] we would be a $60bn company; we would be employing 450,000 teachers, 55,000 senior leaders – that’s the size of organisation that we are trying to build. ”

In the meantime I spotted this recently in a book store in Dubai. As always, if you don’t keep the customer happy someone else will muscle in and try to offer a better service at the same or a lower cost regardless of your communications strategy. 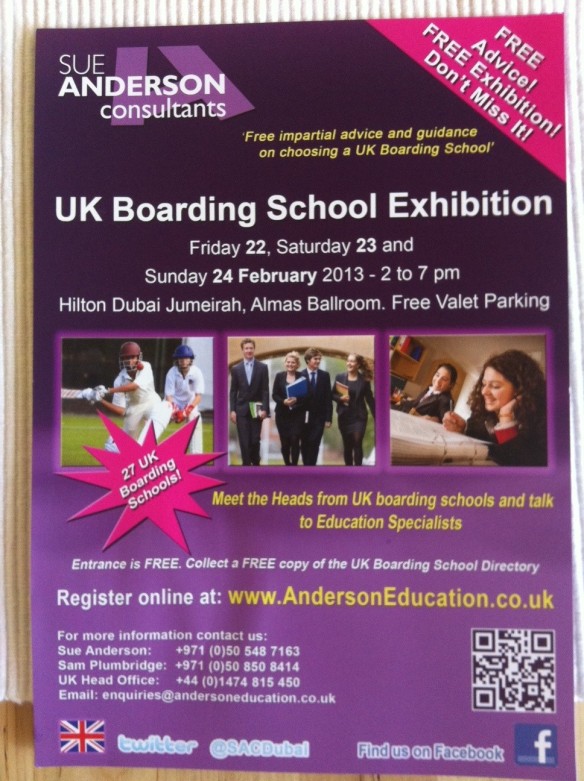 There’s always an alternative but would your child be happier and better off boarding in the UK than going to school in Dubai? And would it be cheaper?