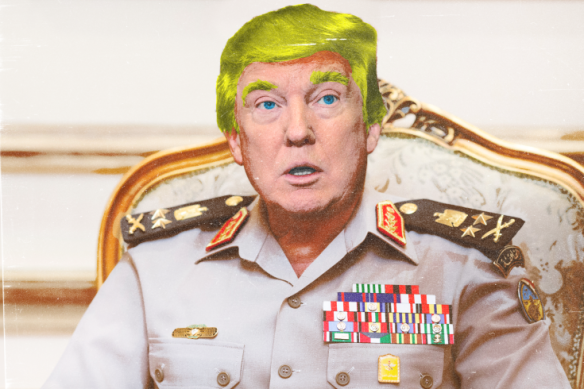 President Trump and his team have shown increasing disdain for the media during their first weekend in office. Some commentators have drawn parallels to my own region (image source: Vocativ)

If the first two days were anything to go by, we’re in for four years of presidential reality TV. From the spectacle of the inauguration of the 45th President of the United States to an impromptu press announcement at the White House (there were no questions, so I won’t call it a briefing), and news interviews by White House staffers attacking the media; all of these events have made for compelling viewing.

Looking in from the outside, here in the Middle East, none of these actions should surprise or startle me. I live in a region where the words media and propaganda are often used to mean the same thing in the Arabic language by the region’s population. I’ve also heard many commentators in the region (and in the US) compare what the Trump administration is doing with the media to how regimes such as Iraq’s Saddam Hussein ‘communicated’ (if you want an example, just watch this clip from Saddam’s Minister of Information Muhammed Saeed al-Sahaf during the 2003 Iraq invasion – the link has been updated).

While there’s been much laughter at some of the messaging (the phrase “alternative facts” is my vote for the dictionary addition of 2017), I’ve seen a number of worrying signs that the Trump Administration wants to take the media and the public down a path that we’re all too familiar with in the region. Here’s why.

The first step on this road is silencing critics. And those who have been most critical of President Trump are the media. During the weekend when visiting Langley, the CIA’s headquarters, he uttered the line, “The reason you’re my first stop is that, as you know, I have a running war with the media. They are among the most dishonest human beings on Earth.” This was in part due to their coverage of the Presidential Inauguration, and their rebuttal of the claims on the number of attendees.

This isn’t a new statement. President Trump has made the claim numerous times, including in April 2016 when he said, “You know we have a great time considering the subject matter is no good. Right? But when we say—look at all those hats, right?—”Make America Great Again.” When we say that—you know somebody, a reporter—by the way the world’s most dishonest people are back there. Look at all the cameras going. Look at all those cameras. It’s unbelievable. They are dishonest. Most of them. Not all of them. But Most of them.”

And, here he is on camera saying the same thing (the link has been updated).

The reasoning is simple. American media is independent of any government ownership, and as such it often takes politicians to task for their words and deeds. By delegitimizing the media and going straight to the public through social media (mainly Twitter), President Trump and his administration won’t face the same level of intrusive questioning. The administration has already threatened to hold the media to account, and President Trump has held one press conference since July 2016, during which he claimed CNN and Buzzfeed were fake news sites. A free media is an essential tool to hold governments to account; muzzle the media, discredit them, and you’ll face fewer questions from a diminishing press sector.

Vocativ has run a piece on this, named Trump And The Media: The Arab Dictator’s Guide. It’s a great read for those of you who follow media-related issues.

President Trump and his team are masters at switching attention from one issue to answer. In his blog, the London-based PR professional Stephen Waddington has listed a number of tactics used to divert attention from hard policy issues to softer social issues. One of my favorites is dead cats, and to quote from Wadds:

Trump uses Twitter as a tactical weapon, hitting out at opponents, and directly countering attacks.

Tweets are literal, short and direct. He uses capital letters, single words and repetition for effect. There can be no uncertainty in the content or context of a message, and he seldom entertains any further discussion.

It’s an approach is known as the dead cat, created by political strategist Lynton Crosby. His response to losing an argument was to throw an issue, known as a dead cat, on the table.

The appearance of a dead cat, albeit metaphorical, is shocking. It quickly shifts attention, forcing opponents to move on and focus on a new issue.

And then there’s a concept called the Overton Window. Developed by political analyst Joseph Overton, this is a spectrum of views which are deemed acceptable to the public. It also explains how  a theory of how a policy that’s initially considered extreme might over time be normalized through gradual shifts in public opinion.

There’s a similar theory in marketing. Known as the Anchoring Effect, this describes a common human tendency to rely too heavily on the first piece of information offered (the “anchor”) when making decisions. Once the anchor is set, decisions are then made by adjusting around the initial anchor, regardless of the legitimacy of the actual anchor number. For example, a brand will introduce a new, super premium/expensive toothpaste. That new product will shift perception of the whole category, and push consumers to spend more on toothpaste by choosing the second or third most expensive option.

We’re seeing this use of the Overton Window and the Anchoring Effect in US politics today, with politicians introducing extreme ideas to shift the discourse away from the mainstream and towards their own views and beliefs. They’re changing the narrative over the long-term, to make what was once unpalatable an acceptable argument.

These narrative tactics have been used in countless societies, most recently in countries such as Israel, where the public has accepted once right-wing ideas such as the expansion of settlements. It’s clear that President Trump’s team aren’t interested in answering questions on issues such as the Affordable Care Act, but rather they want to change the narrative around “Making America Great Again”, an idea of little substance but great appeal. We’re used to such efforts in the Middle East (Saddam regularly compared himself to great Iraqi heroes from history, as a means to encourage nostalgia and promote similar ideals).

It’s also clear that President Trump has a thin skin. He’s repeated countless theories and statements about winning the popular vote (the President claims, without any evidence, that he lost the popular vote based on mass voter fraud). And then there’s the debate around the Inauguration attendance. This President takes things personally. He sees himself as a nation strongman who will change US politics for the betterment of its people. And woe betide those who disagree with him.

What’s also remarkable is how his team speak of the President. During the CIA visit at the weekend Vice President Pence introduced the President by informing the audience that he had never met anyone “who is a greater strategic thinker” on matters of national security. The White House Chief of Staff Reince Priebus said on Sunday that, “I’ve never seen anyone work harder or have more energy than this president.”

If you were to listen to the administration’s messaging, you’d think President Trump is a superman, an Übermensch from the pages of Friedrich Nietzsche. The Chicago Tribune’s Steve Chapman points out the folly in their praise, but how many will believe the fawning praise? And where will this lead us to? Will we see the White House building a cult of personality around the President?

As a person who straddles both Eastern and Western cultures, I can see the successes and failures of these societies a different clarity. I admire the US for its freedom of speech (which is enshrined in the Constitution) and for its media industry. I’m also a believer in public debate when it comes to governance. Are the past couple of days a sign of things to come in the US? I hope that I’m mistaken, but over this first weekend of the Trump Presidency I have seen parallels between the two regions when it comes to media messaging. And this isn’t what I want to see for the US. I hope I’m wrong.