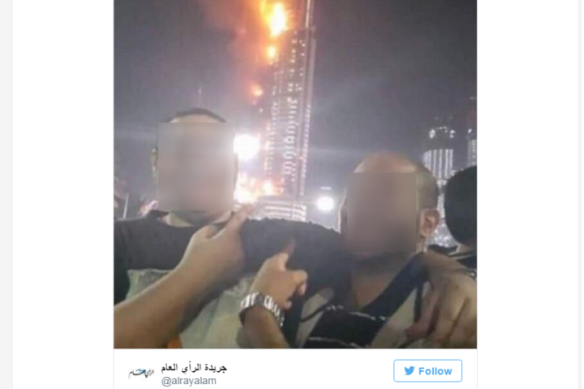 Was this inappropriate? Most certainly. But what could get you jailed is not just a picture that is in poor taste, but rather the comments your friends make on that post.

We all do stupid things, and we unfortunately then post these acts of idiocy online. Combine that with a situation like we had during New Year’s Eve, and you’ve got a situation that could at best be described as combustible.

As the flames ravaged Dubai’s The Address Hotel on New Year’s Eve, some people decided to take selfies. A few posted these selfies online, to Instagram and Facebook. At least two people, two young men, were arrested for their selfie (pictured above) while the Emirate’s Public Prosecution investigated their case.

There’s been much speculation online as to why the men were arrested, with many commentators arguing that the action defamed the country and its image – let’s remember that defamation is a criminal offense in the Gulf, with a minimum fine of 500,000 Dirhams and jail time in the UAE (as well as deportation for expatriates). Many have posted selfies at the same location, with smiles, grins and laughs, and such expressions of emotion may have been considered a case of schadenfreude by the authorities.

However, according to the English-language newspaper 7Days which spoke to the lawyer of the two accused, they were investigated not for the image per se, but rather for the comments made about the image. The argument goes that the person who posts content is also responsible for the comments on that post, even if those comments are not written by the same person but his or her friends, family (or anyone who wants to get you jailed).

Luckily for them, the two were released from prison after a couple of days with no charge after investigators found that there was “no evidence of criminal intent”. However, remember that in future it’s not just your stupidity that could land you in jail, but that of your online contacts as well. Their comments could cross the legal line of what is defined as defamation, so don’t post images or any other type of post that could get you into trouble. Just don’t…