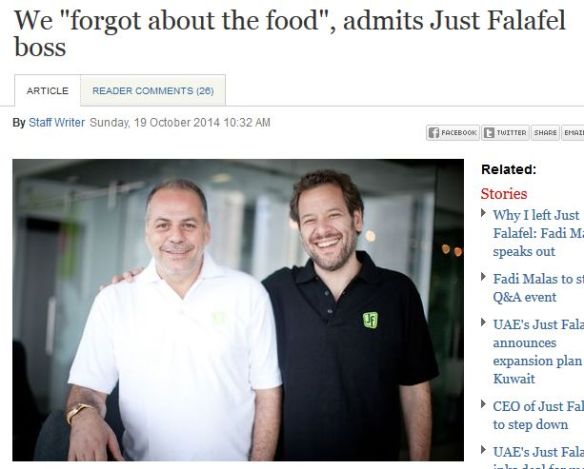 Do you agree or disagree with what Mohamad Bitar did, and why?

Should we admit when things don’t go the way we planned? It’s a tough one. Few corporates hold up their hands when plans go awry (unless there’s a crisis of biblical proportions). US-based corporates such as Walmart are now taking on media outlets to argue their point (this post from Walmart is a remarkable example of fighting back).

Even fewer company bosses in the Gulf go off track and talk from the heart. However, as with everything there are exceptions. Just Falafel is often touted as a home-grown success story, a tale of how a local brand has become global. Founded in 2007 in Abu Dhabi, the falafel-focused outlet has approximately 52 stores in 18 countries according to its website.

However, the chain isn’t to everyone’s tastes. A news story on the English-language website Arabian Business which announced the reasons for the departure of the chain’s former CEO Fadi Malas was used as a comment board by readers to explain their reasons for not liking the brand’s falafel.

Fair enough you may say. But what followed was either inspirational or horrifying depending on which side of the open/control communications fence you’re on. The Just Falafel founder and MD, Mohamad Bitar, took to the site’s comments section to explain how the company had “forgot about the food”.

The comment as written by just Falafel’s Bitar on ArabianBusiness.com

The hacks at Arabian Business then took Bitar’s comments and span out a new story, to which readers took to explain what they believe went wrong and how Just Falafel can put it right.

For some consumers, an admission of error can be a powerful tool to reassess and re-engage with a brand. For others, it’s all about projecting an image that others can believe in, and not deviating from that message. Is Mohamad Bitar’s message a moment of genius (if we were in America, I’m sure we’d be calling his move crowd innovation), or does it signal a need for someone to crack the whip at the brand and get everyone on message?