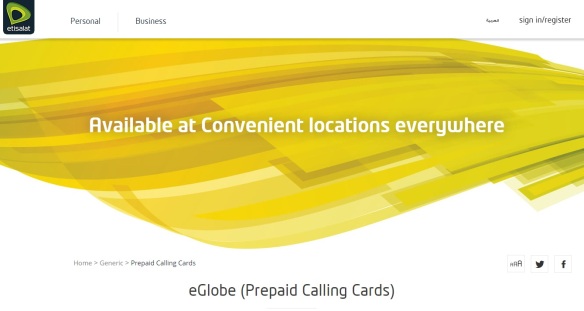 Do you know about the eGlobe card and where to find it? Is this the real #EtisalatChallenge?

It’s Gitex week, and its technology time. For those of you who don’t know Gitex, imagine tens of thousands of people talking about hardware, software and all things geeky. But I digress.

We’ve had our little bundle of joy and we’ve been lucky enough to have another addition to the family this month. To help her feel at home, we wanted to buy phone cards so that she could use the landline and she’d know how much she’d spend each time she’d call home (why not a mobile you ask? Well, landlines offer better voice quality, more stable connections and are usually cheaper).

After a little bit of research and a lot of shop visits, we realized that the VoIP calling cards which were being advertised at the start of the year by the two phone companies Etisalat and Du, Five and Hello! respectively, were no longer on sale (though you’d be hard pressed to find an announcement in the media).

Instead, Etisalat, the UAE’s largest phone company, was offering on its website a solution called eGlobe. To quote:

Use your prepaid, disposable Calling Cards for services such as recharging and renewing your Landline Prepaid (Maysour) account, Home Country Direct calls, Prepaid Internet, eVision pay-per-view, Hotspots, and more, in addition to national and international calls from any phone.

All well and good. But where can one buy them?

So off I went. To the first store, where the response was, “What?” Ok, it’s a small store. Maybe they’ll have the cards at the local Co-op here in Abu Dhabi. “No, sir. We only have mobile recharge cards.” And then, after calling up the help line and getting no where, I marched off to the Etisalat shop, where, after ten minutes, I finally spoke to someone who knew about the eGlobe cards. “We have them with a chain called Fatima Stores…” So, off I went to the Fatima Store behind Dana hotel in downtown Abu Dhabi.

After walking around for a while, I finally found the shop. And what happened? “No, I’ve never heard of eGlobe cards.”

As the Thursday afternoon and evening passed me by and having driven, walked and talked in circles all of the afternoon and the evening, it dawned on me. What I had written about a couple of months back was a hoax. You launch a product on your website, and yet you tell none of your staff about it or sell it through your traditional distribution channels. It’s almost like one of those impossible game shows where the odds are rigged forever against you. The eGlobe card is the original, the true Etisalat Challenge.

Are you up to the task of finding the eGlobe card?