Bahrain has another local destination to head to if you’re looking for traditional fare. Check out this video by online channel MyBahrainME and I dare you not to lick your lips in anticipation!

Bahrain is a wonderful place; it’s a country that is always full of pleasant surprises. My wife and her family told me about a restaurant called Zaafaran, a small place in the heart of Souq Muharraq that is known for its traditional Bahraini dishes. We headed down to Muharraq on a Friday morning and I had to keep my eyes open when looking for the place (Zaafaran is just after Souq Al Qaiseriya a right hand turn after all of the sweet shops on the main road for those who know Muharraq).

After spotting the place and finding a parking spot, which is no mean feat in Muharraq, we headed to Zaafaran. The restaurant itself is tiny, with seating for no more than 30 people. The decor is traditional, and the staff are also dressed to match in traditional Bahraini attire. The setting is almost as impressive as the food, with (comfy) wooden benches to plump yourself down on.

The breakfast menu is set, with a selection of small dishes that include balaleet or sweetened vermicelli with egg, nakhi which is a Bahraini twist on chick peas, mahiawa bread or bread cooked in fish sauce, fuul, spicy tomato beans, and Bahraini kebab sandwiches (which are vegetarian for anyone who’s interested). It’s most fun to eat with your hands and the bread basket which comes as standard.

I wouldn’t be doing justice to Zaafaran by saying that this place is remarkable both for the food and the setting. If you’re looking for both a wonderful eat as well as an amazing time out then head down to Zaafaran. It’s right next to Souq Al Qaiseriya which is one of the oldest markets in Bahrain and an amazing spectacle in itself. And as for the cost? It’s a whole lot cheaper than Dubai’s Biker Cafe’s breakfast for the best local breakfast in the Arabian Gulf and costs about 50 to 60 Dirhams a person including all the chai kerak tea you can woof down. Just down measure your cholesterol levels for a good few days after!

Enjoy the pictures and get down to Zaafaran while there’s still space left at this remarkable restaurant-cafe.

Zaafaran is an Instagrammer’s delight! But I did put my phone down long enough to eat! 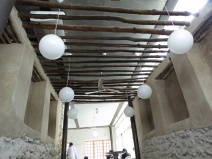 Everything about Zaafaran is authentic, including the decor

What could be better for breakfast?

Bahraini kebab sandwiches are just delicious but they’re not meat.

I just love this stuff. Chai kerak or cardamon tea. Much better than Red Bull!

The whole ambiance reflects a past generation

I can’t just keep my eyes off the food!

Bread cooked in fish sauce? It tastes much, much better than it sounds and is a real treat

Zaafaran isn’t easy to spot but there is an Arabic sign on the outside. Just keep your eyes open and ask around.

One of Muharraq’s oldest markets, Souq Al Qaiseriyah, is just next door. Go for a walk and burn off some calories.

Don’t even ask me what all of this stuff is!