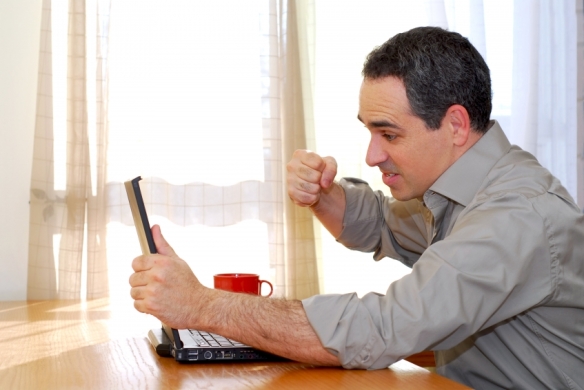 I’m a patient man. Really, I am (I can imagine my wife shaking her head right now, but it’s true). I can put up with anything. It’s just that I don’t want to give up the good fight when it comes to telling companies that we customers in the Gulf (and especially in the UAE) deserve more. Here’s one story of a company that could do a whole lot more to be customer-friendly, my favorite Etisalat.

At the beginning of the year, I was jumping up and down with excitement. For the first time I could change my home internet provider at my home in Abu Dhabi. For years, I’d been stuck with Etisalat and its atrociously poor customer service. Now, I could move to Du. I took up the opportunity, and moved. Unfortunately, no matter how much I wanted it to work, it was a doomed romance. I couldn’t get television services as part of my internet and telephone services (I still can’t explain this one), and, most importantly, Du’s internet connection was poor and often dropped. With a tear in my eye, I had to go back to Etisalat.

I head on down to one of Etisalat’s outlets and make the request for internet at home. The request was simple enough, until we got to the nitty gritty of the agreement which included a router and phone. There was no need for either, I explained, as I’d already spent on both. No worries, I was told by the sales person, I could use my routers but I’d still have to take the router and phone as part of the package (in other words, the package was fixed).

First step done, I waited for the engineer to come around. He did and he had a look at my internet setup. He then asked if could set up the network, including the Etisalat router, a D-Link AC1750 router. I said I’d like my router set up, a Linksys WRT1900ac which I’d already spent a significant chunk of money on and which I’d already set up for my home.

After an hour of ‘discussion’, including lines such as ‘the Etisalat connection will only work with the D-Link router from Etisalat’, and that ‘the Linksys wouldn’t work as it couldn’t be configured’ (both of which were utter nonsense), I spoke to a supervisor who told me that it was a sales decision and that I’d need to go back to the store to sort it out. I even offered to take the router but not to use it. My request was turned down. In essence, no Etisalat router installed = no internet.

Two days later, I received an SMS saying that my original request for internet had been declined and that I’d have to make a new request. Which of course I did, and during which I asked the same things, to be told the same excuses. Essentially, someone in head office had decided that he knew best, better than his customers, and that without a router from Etisalat, which we pay for, we can’t get internet from Etisalat.

What pains me throughout this is that I’m not alone in my point of view (and my suffering). The first engineer explained that every day new seven or eight customers would tell him the same thing, and yet he couldn’t do anything. All that we customers can do is dump our expensive kit so that someone in Etisalat can make more money. Forget listening to the customer, forget keeping them happy and increasing their average spend through giving them what they want. Let’s ram products down their throat as there’s nowhere they can go and no one they can complain to. It’s naturally disappointing, especially when you consider the leaps and bounds that are being made by other operators across the globe, even here in the Gulf.

The experience was topped off by my wife paying the second engineer to reconfigure all of our wireless extenders at home to work with the new router.

Customer service and Etisalat? It seems I, like many others, have no choice but to suffer as we wait for a customer-centric epiphany among Etisalat’s executive management.

5 thoughts on “What Customer Service? Etisalat and its inability to put customers first…”