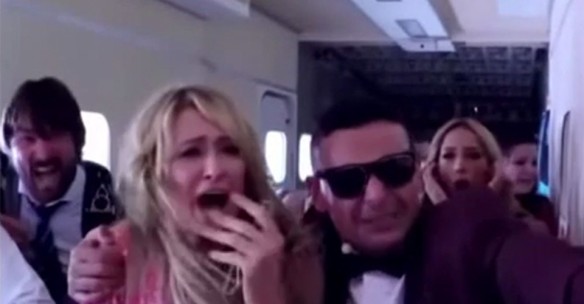 Was Paris in on the prank? Or did she have no idea what was going on?

If you’ve been catching some television in between fasting, praying, breaking the fast, and trying to work during the holy month of Ramadan, you may have come across a series on MBC One channel called Ramez Wakel Al Jaw (quite literally Ramez eats the air). The idea behind the show is simple – take up a celebrity in a scenic flight above Dubai, pretend that the plane is going down, and film the ensuing chaos. Each show, which is aired on a daily basis, would feature a different celebrity.

The big draw for the show, which is only being aired during Ramadan (which is essentially the prime time for TV viewership in the Middle East), was Paris Hilton, the hotel chain heiress and Hollywood socialite. Paris was the only non-Arab celebrity to be featured on the show, and she was used extensively in the ad campaign leading up to the show’s launch (in fact, she was the only celebrity to be featured in the aforementioned ads).

Now, we come to the Paris episode itself. To quote from the UAE’s English-language The National:

The set-up involved the stars boarding a light plane for a leisurely, aerial tour over the emirate, only for the situation to escalate — or should we say, descend — into terror: the aircraft suddenly nosedived after a simulated technical failure. The video clip, which went viral after it was uploaded on YouTube, shows Hilton getting anxious, then panicking as skydivers masquerading as passengers open the cabin door and leap out.

Only after the plane returned to the ground was the celebrity told the truth. Taking it surprisingly well, a shaky Hilton goes on to praise Galal for “taking it to the next level. I have seen Punk’d [American prank reality show hosted by Ashton Kutcher] but you have taken me on a plane and nearly killed me”.

For a more visual explanation, CNN’s report sums up the story wonderfully.

Paris’ response to the episode being aired was swift. She intended to sue, according to TMZ.com which broke the news.

Paris Hilton is telling business associates … she will sue the people responsible for putting her on a plane that appeared to be in crash mode … just to get a rise out of her.

We’re told Paris is furious over the stunt … in which a TV crew got the pilot to pretend to shut down the engines in her plane, and then nose-dive to the ground. Paris says she was in mortal fear for her life … something the video pretty clearly shows.

Our sources say she’s “totally freaked out” over flying anywhere … something she’s required to constantly do. She’s already called her lawyers to find out who’s responsible, and they told her she has a solid case for emotional distress.

Paris tells them she had absolutely no clue this was a prank … she wasn’t in on it. She also doesn’t believe anyone in her camp was involved.

The episode and the reaction of Paris to sue Ramez Galal made headlines the world over, despite no one outside of the region having heard of the show. The idea of a global celebrity having been pranked in such an abhorrent stunt with her life seemingly at risk was enough to garner hundreds of pages worth of media attention.

But if we step back a moment, let’s talk through what happened and why this was obviously planned from the get-go:

1) The timings – the show was pre-shot; in other words, it wasn’t live. Paris was used extensively to promote the show, and one would have thought that Paris would have looked to sue immediately after her episode was shot several weeks before Ramadan. This wasn’t the case.
2) The payment – no celebrity worth their salt does anything for free, and Paris is no different. If you want her, you have to pay. If TMZ.com is to be believed, Paris was apparently paid over a million dollars to take part in the stunt. She’d have known beforehand what was going to happen. Nevertheless, she pulls off the acting (unlike in her movie roles).
3) The publicity – both Paris and Ramez benefited from the media coverage of the show. Paris comes off as someone we can feel for and empathize with, which isn’t usually the case. And Ramez gets global coverage for the show which boosts the ratings, and for himself. The threat to sue amplifies the media coverage.

The question is, who got scammed? Paris, the viewers or the media? No matter what, everyone seems to have been entertained.

In the irony of ironies, a SkyDive Dubai plane crash-landed in the desert this week. The incident, which closely resembled the prank scenario, was widely reported by the media.

This emergency landing wasn’t a prank…

Whilst there were fortunately no injuries, none of the media made the connection between Ramez Galal and his show, which is based at SkyDive Dubai’s site, and the plane coming down in a similar scenario. It’s just as well for Ramez – one lawsuit is more than enough this Ramadan. But you tell me, is life imitating art, or is art imitating life?