It’s not been the best of summers for Qatar’s media scene. First, there was a slip at the Arabic-language daily Al-Sharq. It wasn’t so much a slip-up as a huge !@#$-up. The paper’s long-time editor-in-chief Jaber Al Harmi was forced to resign after the publication of a photograph depicting sex scenes from the Kama Sutra. The story was best told by the Associated Press. But before that, the offending image is below. 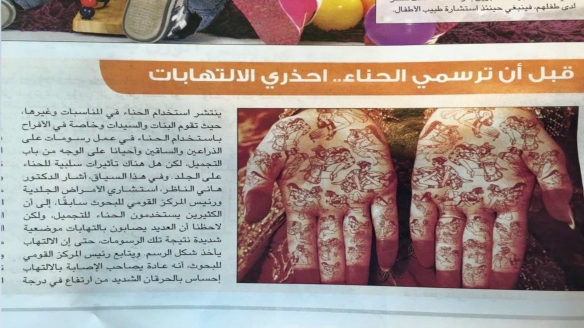 Al Sharq’s choice of imagery for henna tattoos really couldn’t have been worse. But where did they find the image?

Harmi took to the paper’s website to describe the incident as “a completely unintended mistake” and the “worst” he had known in his 25-year career in journalism and said he took full responsibility for what happened.

He said he “offered my resignation out of moral responsibility”.

It is not yet known if the resignation has been accepted by the paper’s bosses.

“All apologies are not enough for such a serious mistake, which occurred by publishing morally inappropriate images,” wrote Harmi.

“Our values and principles provide a red line that cannot be breached and so I presented my resignation to the board.”

He added: “This tragic incident revealed to us the extent of the adherence of our community to religion, values and morals.”

On Twitter, he wrote that “all those behind this mistake” have been fired.

But it got better. Following on from the unfolding crisis at FIFA, Qatar has been looking to tackle the corruption allegations surrounding its winning of the 2022 World Cup. As part of this plan, Qatar lobbied the Gulf to request media support. What they got was a call by the Gulf’s governments for all regional media to support Qatar. More from the Doha News website.

In an effort to “counter” media criticism of Qatar’s preparations for the 2022 World Cup, the GCC is calling on journalists in the Gulf to publish stories that support the country’s right to host the international football tournament.

The directive was released following a meeting of GCC information ministers in Doha this week. In a joint statement carried by state news agency QNA late last night, they said:

“GCC information ministers renewed their call for the media to counter all those who seek to question the right of the State of Qatar to host the 2022 World Cup, stressing GCC states full solidarity with the State of Qatar and encouraged media in the GCC to continue countering these campaigns at home and abroad.”

As we say, the media should report the news and not make the news. However, with all that is happening in Qatar, expect more media machinations soon.