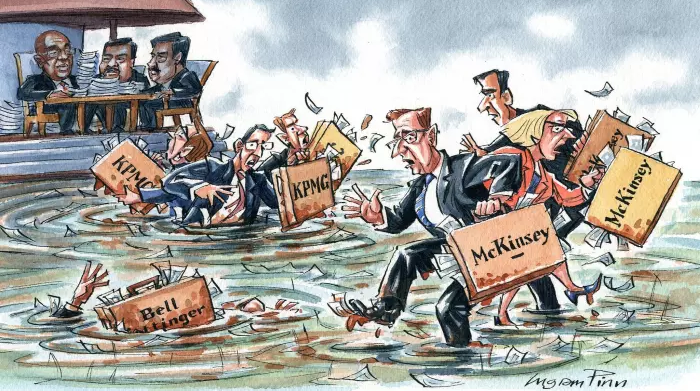 McKinsey’s reputation has been heavily impacted by its work in South Africa. Could the same happen in Saudi? (image credit: Ingram Pinn)

McKinsey is a household name, at least in Saudi and South Africa. And not for the right reasons either.

The firm, which consults for governments and businesses the world over, hasn’t had a good time of it lately in these two markets. In South Africa, McKinsey has been embroiled in the Gupta family scandals through its work with the state energy firm Eskom and Trillian, a local company linked to the Gupta family.

In Saudi, McKinsey has been working with the government for years. The company hasn’t always been popular, and has often been blamed by the Saudi public for the austerity measures the Kingdom has enacted. Recent events have shone even more light on McKinsey. An article in the Wall Street Journal looked at the consultancy’s habit of hiring from the elites. To quote:

“The consulting company has employed, among others, at least two children of the man who serves as the Saudi energy minister and head of the state oil company, a son of the finance minister and a son of the CEO of government-controlled Saudi Arabian Mining Co.”

The Wall Street Journal piece describes in detail McKinsey’s company’s hiring practices in the Kingdom, and also notes that there is no allegation of wrongdoing by the firm.

The issue that McKinsey faces isn’t dissimilar to tens of thousands of other firms. It’s the choice between reputation and profit. However, few other firms are as prominent as the consultancy, partly owing to its clients (primarily government in emerging markets) and the quality of McKinsey’s people. To quote the response to the Wall Street Journal article, a McKinsey spokesperson explained that:

“McKinsey is a meritocracy. We hire exceptional people and are confident in the robust policies and practices that underpin our recruiting and development both globally and locally.”

How many exceptional people would it take to understand that working with the Gupta family in South Africa wouldn’t be good for business. Five minutes of due diligence would have thrown up the links between Eskom, Trillian and the Gupta family.

Last year I wrote about Caroline Sapriel’s masterclass on crisis communications. There’s one chart I want to re-share, which should be a guide for all of us. 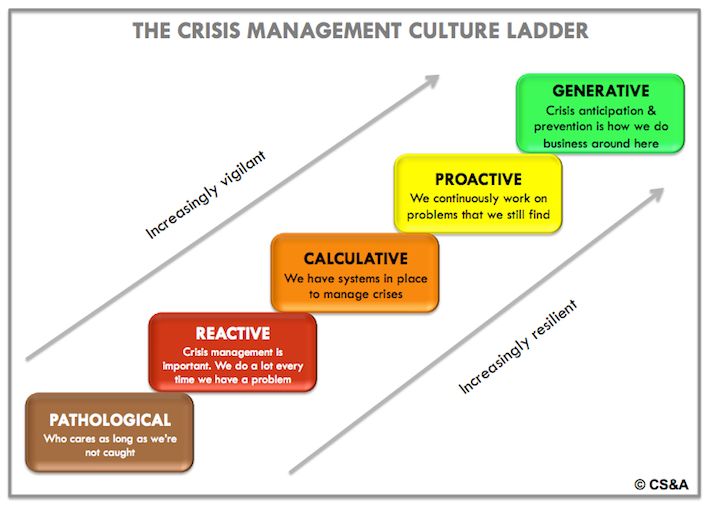 The question that I have for McKinsey (and every other business leader) is what price would you put on reputation? Even if the firm did work in a legally appropriate fashion, which McKinsey has claimed it did in South Africa, the spirit and the letter of the law are two different things. This question could also be asked of KPMG and SAP, who have also found themselves in the thick of it in South Africa.

If you’re unsure as to where you are on the culture ladder, here’s a stress test you can use to understand how your firm fares. Can your executives answer the following questions relating to any business engagement?

Writing in the Financial Times in September of this year, John Gapper shared his thoughts on McKinsey’s activities in South Africa:

The firm has a brisk defence to accusations from South African politicians and Corruption Watch that it facilitated state capture by helping Trillian to gain money from Eskom. It says that its own inquiry into its behaviour has not uncovered wrongdoing, nor anything that would require it to report itself to the US authorities under anti-corruption laws. This seems to be setting the reputational bar rather low.
Being willing to charge an entrenched institution in a fractured country so much money looks awfully like rent seeking, especially when payments of up to $700m were to be split with what it should have known was a dubious consulting partner. McKinsey is full of superior intellects but sometimes you only need to open your eyes. None of this occurred in a vacuum.
The group Business Unity South Africa this month bemoaned the “scourge of corruption that is stifling the country” and called for an end to a “culture of immunity”. Each time that a consultant or accountant fails to take a decisive stand, the scourge worsens. KPMG has recognised it but McKinsey is still learning. It could start by confessing that it was wrong and promising not to repeat its failure.
The firm still maintains that it behaved correctly and is walking the tightrope of self-justification. I am intrigued to see how long it will take to fall off.

I wonder if the same will be said of McKinsey’s activities in Saudi Arabia. What price is McKinsey willing to put on its reputation? You tell me.