For many of you, the headline will be no surprise. When it comes to mental health issues, the public relations and communications industry just isn’t doing enough. A survey undertaken by the PRCA and ICCO, in partnership with IABC, across Europe and the Middle East underlines the scale of the issue that is facing the industry. Here are my highlights from the 140 plus respondents.

1. Mental Health is an issue for many of us

A quarter of those surveyed said they’d had mental health issues, the majority of them being diagnosed (either professionally or self-diagnosed) with depression or anxiety. 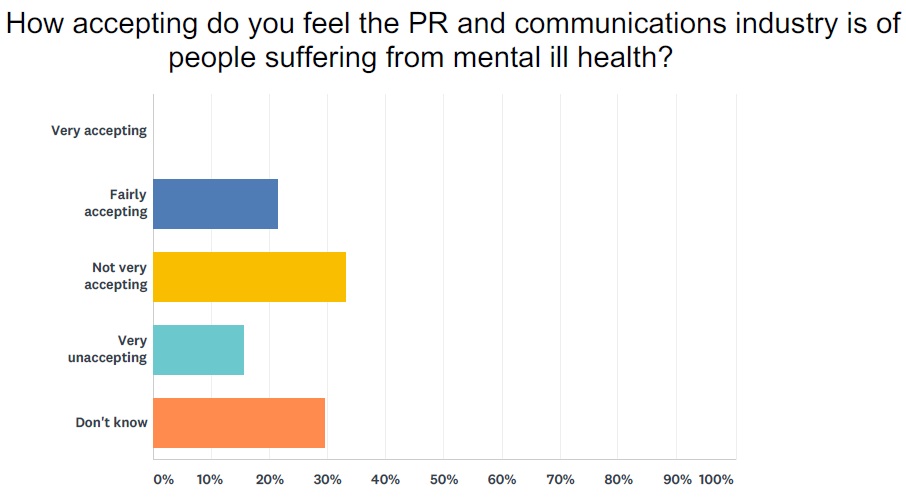 There’s a widespread perception among people working in the PR industry that the industry as a whole isn’t willing to help those suffering from mental ill health. A quarter did say that they felt the profession was fairly accepting, while almost half said the industry was either not very accepting or very accepting. Almost a third responded by saying they didn’t know.

3. Few Organizations have a mental health policy in place

What’s most concerning is the the apparent lack of any formal mental health frameworks or policies in place among both agencies and client-side teams. Fewer than ten percent of respondents said their team had any systems in place. I’d assume this would also extend to insurance coverage for mental health issues. If there are policies in place, it’s clear that they’re not being communicated effectively to employees.

4. Workloads up, and Stress is also on the rise

Unsurprisingly, over fifty percent of respondents felt more stressed today than they did a year back

These responses mirror my own observations about workloads. The industry is struggling with workloads, especially on the agency side where margins are tight. Over half of respondents said they’re suffering from more stress today compared to 12 months ago, partly due to internal pressures and also partly due to client demands (this was a frequent issue that was flagged up by agency people, underlining the lack of understanding many on the client side have on agency pressures).

5. Colleagues, not Managers, are the go-to people to talk about mental health 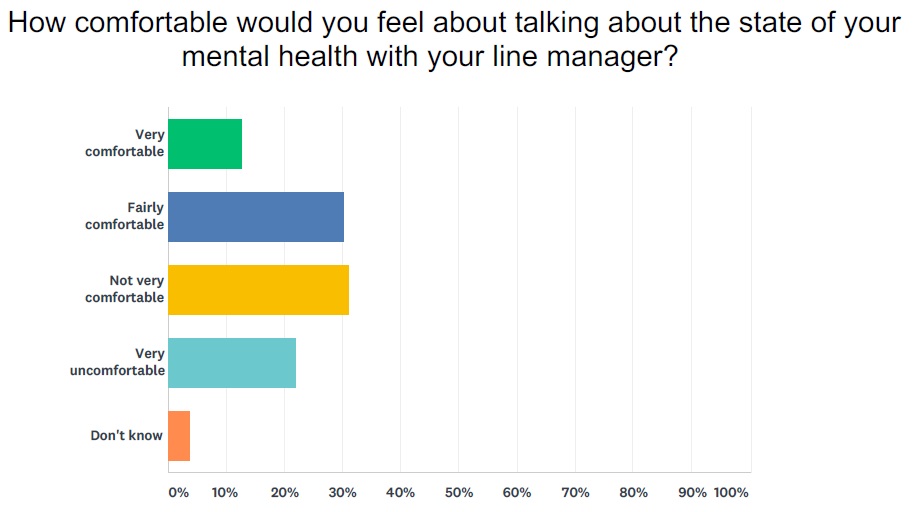 Management need to do more to be approachable on the issue on mental health. This may prove a challenge for some, especially if the employee believes that the manager is responsible for his or her poor mental health.

This is just a snapshot of the research that the PRCA and ICCO will be releasing today. I’d like to thank both organizations for their work, as well as the CIPR, for promoting debate on a topic which has been ignored for far too long. The PRCA will be hosting webinars on mental health and how you can best deal with this issue. The CIPR also has a host of resources online. Please do visit their respective websites to keep up to date on the issue. I hope more associations begin to understand the importance of talking about this issue, so that those in our industry who need help get it, and so that employers realize the importance of promoting mental well being and a balanced approach to how we work.