Every once in a while, you come across a story that is heartbreaking. What happened to Natalie Creane is tragic. Four years ago Natalie and her new fiance celebrated their engagement by staying at the Emirates Palace Hotel in Abu Dhabi. After arriving she opened the wardrobe door and bent to put her shoes in the wardrobe. She looked up as a wooden panel fell from the front of the AV unit and hit her on the head, right on the temporal lobe.

According to a number of sites set up on her behalf Natalie was diagnosed with intractable refractory epilepsy and brain trauma. Since then she has been in four comas, she suffers from seizures which cause her to collapse suddenly and she has frequently sustained serious injuries during these seizures, including broken bones. Natalie has been on ventilators, had blood clots in her lung and leg, extreme blood toxicity, paralysis, temporary loss of sight, massive hair loss, severe debilitating headaches, temporary loss of speech, confusion, permanent memory loss, insomnia, constant infections due to suppressed immunity and has been admitted over 20 times to intensive care. Natalie suffers from Post Traumatic Intractable Refractory Epilepsy and Traumatic Brain Injury.

Despite all that has happened to her Natalie’s case with the Emirates Palace Hotel is still outstanding. The Emirates Palace Hotel initially referred the family to its insurance company. After talks with the company broke down, the family was faced with the hotel’s lawyers. Forced to take their case to court, a full two years after the accident, the family is still fighting for justice now – four years on from Natalie’s accident.

After four years of what I can imagine to be a living nightmare, including two years of litigation, Natalie’s family have finally gone public. They set up a Facebook page on the 9th of July which you can see here, and the family also set up two twitter handles, @JusticeForNatal and @JusticeForNat.

As of today, the Facebook page has 6,114 likes. Even more importantly when it comes to measuring influence and importance on Facebook 4,078 users are currently talking about Natalie. Here’s a screenshot of her page below. 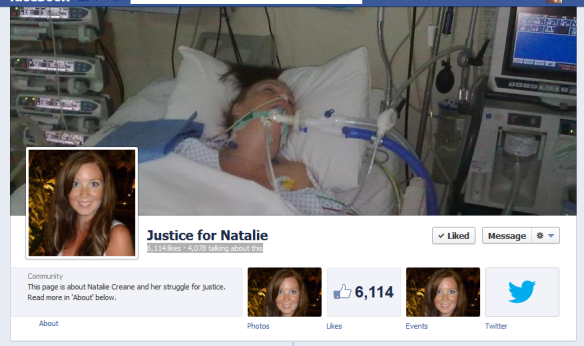 Her family have made use of Twitter to get her story noticed by media through retweets and mentions, posting pictures both via Twitter and Pinterest, and using the hashtag #justicefornatalie (there was some initial confusion online around the 20th when the Twitter handle switched from @justicefornatal to @justicefornat).

Ten days after setting up the social media channels Natalie’s story broke in mainstream media with a news piece in the UAE’s largest English circulation newspaper Gulf News followed by news pieces online at Albawaba and in print with another English-language UAE newspaper, 7Days. Natalie’s story has since been covered by global news outlets such as the BBC and the Huffington Post.

(Natalie’s story was first covered here last year by the National, but owing to the UAE’s defamation and libel laws newspapers use initials rather than full names when covering an active case).

Natalie’s family have also set up an online petition via Care2 where they’re aiming to gather 2,000 signatures (the petition is here and they’ve set up Team Natalie Marathon in Abu Dhabi for November (you can sign up here).

There’s even videos on Youtube, including the below which was put together by a supporter of the campaign.

Natalie’s family have stressed that the campaign has one aim, namely to raise her case’s profile and find some settlement so that Natalie can receive the support that she so desperately needs. 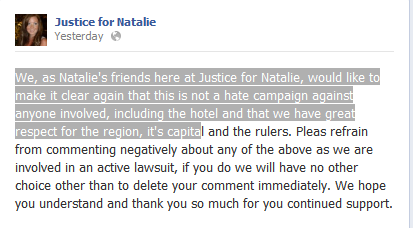 Rather than being a negative, hate campaign against the hotel the family are using human interest messages and regular updates on Natalie’s condition to attract attention and build a community online. In the space of two and a half weeks Natalie’s case has gotten more attention than it has done over four years. Understandably, the family have tried to get this issue resolved in a way that will not prejudice a court settlement, but with Natalie’s condition not improving it’s understandable that they feel the best way to ensure that their daughter has the care she needs is now through public relations.

Natalie is currently in a public hospital in Dubai, Rashid Hospital, where she is receiving palliative care. As her family write on Natalie’s Facebook page, “she urgently needs to receive specialist neurological help but the family has spent all they have over the past four years as they fought to get the hotel to step up and admit its liability for an incident which has resulted in such appalling consequences for Natalie.”

I for one hope that the Emirates Palace Hotel and the Kempinski Hotels group which manages the property settle this as soon as possible. They’re harming their own reputation. And, most importantly, they are denying their own responsibility to provide care for an incident which could be said to be a result of their own negligence.

How online communities have rallied round Natalie’s family is remarkable. And it goes to show how effective social media today can be in highlighting a worthy cause. Let’s all hope that Natalie finally gets justice and receives the support she needs to recover from all that has happened to her.