Two months back Twitter introduced its new censorship policy, which would selectively block tweets on a country by country basis. In its blog, Twitter said it could “reactively withhold content from users in a specific country”.

A month later, that new policy was put to the test. A young Saudi national named Hamza Kashgari tweeted a number of thoughts which were to cause a national outcry not just in the Kingdom but across the Muslim world. Realizing what he’d done, Kashgari deleted his tweets, fled to Malaysia and then promptly get deported back to Saudi Arabia. The full story can be read here. 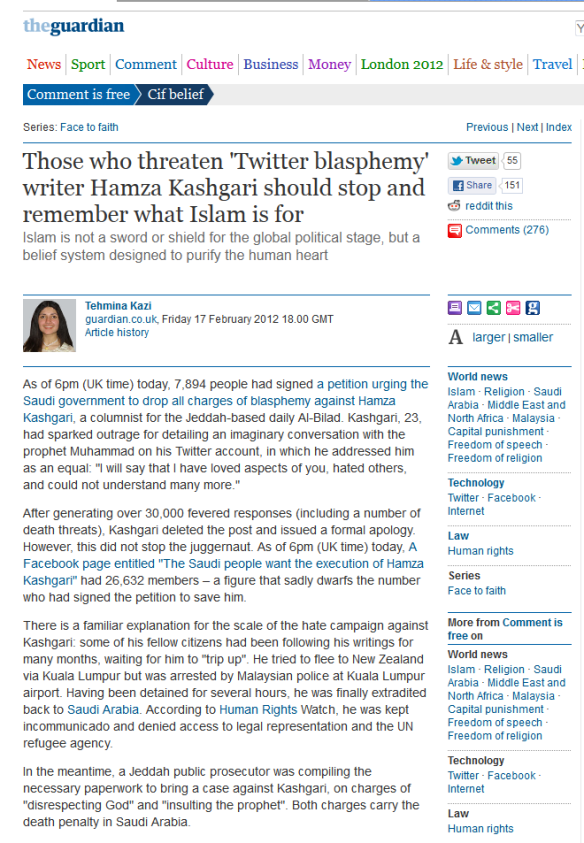 Twitter argued that the change to its censorship policy, from a global mechanism to delete tweets to one where they are censored at a country level, would allow for greater freedom of expression. However, were Twitter’s management team and legal counsel thinking of political or cultural issues where legislation is already in force? One could recount laws on Holocaust denial or incitement to racial hatred as issues where laws in such places as Europe are clear cut; if someone in Germany makes a public statement that denies the Holocaust they can be prosecuted. Twitter’s thinking here is clear. That Tweet can be deleted in Germany, but it could still be seen in another country where the statement does not break the law.

The Kashgari case is different, and less clear-cut. Kashgari’s Tweets may have been less incendiary in a Muslim country such as Turkey which follows a less conservative school of Islamic thought. However, it was not Twitter who censored Kashgari’s tweets but rather the man himself who deleted his messages after receiving death threats.

The question is, how useful is Twitter’s censorship policy on a country-by-country basis without people actively monitoring what is being said online? Even then, with all the traffic on Twitter would anyone be able to actively monitor Twitter? Even if the company was using algorithms would Twitter be able to pick up tweets such as Kashgari’s which are offensive to thousands but which may not explicitly break the law.

If people do tweet a message that is deemed to be illegal or offensive wouldn’t peer pressure and public opinion force them to delete their tweets, as Kashgari did? In which case, what is the point of Twitter’s new censorship player. I’d like to see how their new policy would work in practice, as I am sure many others would do too.