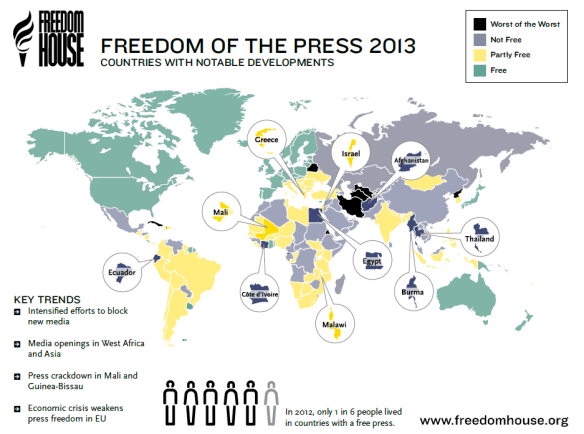 The Middle East’s press freedoms have, on the whole, suffered in 2013 (image source: Freedom House)

The past twelve months haven’t been lacking in terms of seminal events across the Middle East – we’ve experienced war, coups/democratic/popular revolutions (choose/delete based on your bias), and economic revivals across this diverse region. However, it’s fair to say that 2013 hasn’t been a wonderful year for good quality and independent journalism in the Middle East and North Africa region.

Overall, 2013 recorded a grim milestone for global media. According to the Committee to Protect Journalists, the year documented the 1,000th journalist killed in relation to his/her work since the organization began documenting fatalities in 1992. Sky News cameraman Mick Deane was killed in Egypt in August of this year while covering the violence in Cairo.

Over half of the 70 journalists lost this year were killed in the Middle East trio of Syria, Iraq and Egypt. One of those whom we lost at the end of 2013 was Molhem Barakat, a young Syrian freelance photographer who submitted dozens of pictures of the bloody conflict in Aleppo to Reuters. Molhem was killed while covering fighting between government and opposition fighters on December 20th.

A full list of those who have laid down their lives to bring us the reality in war zones and areas of conflict can be seen here at the Committee to Protect Journalists.

Journalists working in safer climes across the MENA region have also faced serious challenges which has impeded their work. Media freedoms were curtailed across the region, with Lebanon being ranked by the US-based NGO Freedom House as the country with the most free press (Lebanon came in at number 112 globally and its press was rated as partly free).

I’m going to quote below from Freedom House’s Freedom of the Press report on the Middle East and North Africa. The report in full is available to download in pdf format here.

The Middle East and North Africa region continued to have the world’s poorest ratings in 2012, with no countries ranked in the Free category, 5 countries designated Partly Free, and 14 countries assessed as Not Free… Although new information platforms — including blogs, social media such as Twitter and Facebook, and smart phones — have had a positive impact, traditional media in much of the region were still constrained by emergency rule, state ownership and editorial directives, harsh blasphemy legislation, and laws against insulting monarchs and public figures.

While the concept of citizen journalism has been slow to take root in the Middle East, a number of countries have jailed persons who have uploaded information such as videos and photographs onto the internet on charges ranging from insulting the national image and harming the country’s reputation to defamation.

The over-riding trend over 2013 has been efforts to monitor, control and censor online debate. A number of countries in the Gulf and North Africa have enacted highly restrictive laws targeting online publishing including blogs and social media that hurts national interests. Even in Kuwait, which was ranked by Freedom House as the Gulf nation with the freest press, journalists have been jailed for reporting on opposition demonstrations. Journalists have been jailed and remain imprisoned in at least eight countries across the Middle East and North Africa according to the Committee to Protect Journalists.

Looking forward, there’s no reason to believe that 2014 will prove to be different to 2013. Civil disputes in Syria, Iraq and Egypt show no signs of being resolved, and sectarian issues seem to be growing in prominence across the region. One bright spot may be a thaw in relations between the West and Iran, following the election of President Rouhani and discussions over Iran’s nuclear programme. However, as social media becomes the most common form of communications across the Middle East the odds are that online censorship will become ever more prominent.